Like Michael Myers rising again in the Halloween movies, I have learned not to trust the apparent political death of Hillary Clinton.  But I feel relatively safe that today’s final tally from the Electoral College will do to Clinton what Donald Pleasance did to Myers at the end of Halloween II.   By the way…what the hell was up with Halloween III?   Well, that’s a topic for another day. 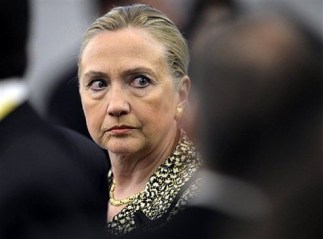 I cannot put it bluntly enough.  Hillary Clinton was one of the worst collection of atoms to ever run for President.  From a political pundit’s standpoint, I cannot recall a major-party Presidential nominee with more built-in negatives than Clinton.  From a human standpoint, I cannot find one single redeeming quality about her as a person.

Where do I begin?  Do I have enough bandwidth allotted to me to adequately convey just how odious a candidate Hillary was?  Remember her infantile defense during the Lewinsky scandal in her husband’s administration in 1998 where she blamed the uncomfortable information on a “vast right-wing conspiracy.” There is a reason that phrase has become a punch-line that has stood the test of time in this fast-paced world where things are forgotten with much more frequency than at any other time in human history. It is so in-your-face absurd that we could not shake it. The times may change, the “Clinton” may change, but the reflexive disposition to blame everything that goes wrong on someone else remained the same.

Here’s what we know. She lied about Benghazi to help Obama get re-elected and to keep her future Presidential ambitions from being scuttled.  Yes, you read that correctly, Hillary supporters.  She LIED about the impetus behind the Benghazi attacks.  We can debate other issues about that attack until the cows come home; but the one irrefutable truth of this kerfuffle is that she lied in attributing it to a YouTube video that practically no one had seen.

Her worse sin happened a few days later when she brazenly lied to the families of the four people killed in Benghazi…then later claimed THEY were lying about her comments.  It requires a special level of evil to look victim’s families to the face and lie—then essentially call them liars for remembering your lie.  I will never forgive her for that.  Never. 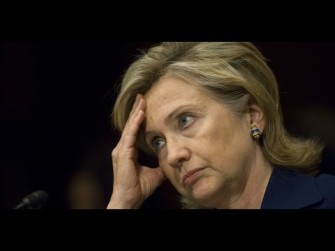 Later, she set up her Email on a private Server so she would have complete control over correspondence, without being bothered that some of the messages may come into play during her upcoming Presidential bid. Her backtracking on that issue was vintage Clinton—no matter if you’re talking about Bill or Hillary.

In March, at the United Nations, Hillary Clinton said, “I did not email any classified material to anyone on my email. There is no classified material”.  Two months later, we learned there WAS classified information in her 30,000 messages. That’s when she modified her bold statements. “I am confident that I never sent nor received any information that was classified at the time it was sent and received.”  We soon learned even THAT was not true. There were some two dozen emails that were, indeed, classified at the time. That prompted a new incarnation of her ever-less-certain defense.  “The State Department has confirmed that I did not send nor receive material marked classified or send material MARKED classified.” But of course…Madam Secretary had already signed the Classified Information Nondisclosure Agreement. That stipulates markings and current classification status were irrelevant in determining the nature of an e-mail. Certainly a Secretary of State and former member of the Senate Armed Services Committee would be fully aware of such things.  Then FBI report came out. It showed Clinton DID send and receive classified information. 100 were classified at the time. More embarrassingly, three were marked with a © denoting they included “Confidential” information.  Then we heard the final walk-back when Clinton told Matt Lauer, “None of the emails sent or received by me had such a header.”

The one consistent characteristic of Hillary Clinton’s political career was her willingness (possibly, her compulsion) to lie about damned-near anything. Even stuff that is not that important. Even stuff that could be easily disproved. Remember her claims that she was named after Sir Edmund Hillary? She said that, even though Sir Hillary did not climb Mount Everest until several years after she was born. The claims of coming under sniper fire in Bosnia were easily disproved by those who were with her at the time. Again—a completely unnecessary lie, easily refuted.  And that’s to say nothing of the southern accent she routinely rediscovered whenever she campaigned south of the Mason-Dixon line.

And there’s more.  MUCH more.  Yes, Clinton DID run a play-for-pay scheme and sold influence through the Clinton Foundation.  Yes, DNC officials worked actively to undermine Bernie Sanders’ Presidential bid. Those two facts came to light during the campaign.

That having been said, she appeared to be a shoo-in.  Republicans had nominated a candidate that was in Clinton’s league as far as negatives were concerned.  Every single poll suggested Election Day was a fait acompli.  I had begun to accept this inevitability with the same emotion I reserve for Detroit Tiger relievers entering the game to protect a lead.  Failure was imminent.   But as we all know, a funny thing happened on the way to the coronation.  People decided they were tired of the same ‘ol same ‘ol. The polls were wrong.  Hillary was humiliated.

Over the past five weeks, I have read pundits who claim that Clinton never “clearly articulated herself.”  Wrong.  It appears that a large segment of the electorate knew EXACTLY who she was…the quintessential slimy politician.  A liar. A sociopath.  Someone who was as cuddly as a porcupine.  Someone who rose to her position through questionable means.  Someone who was simply out for themselves. Someone who did not give a damn about anyone else.

As I have chronicled elsewhere, I am not giddy about President Trump.  I will stipulate that the meltdown he is causing in some DOES do my heart good.  But what does my heart even better is knowing that Hillary Rodham Clinton will go down as one of the greatest failures in modern history.  We’re talking Mike Dukakis-level.  She had a tap-in that Stevie Wonder could have made.  And she blew it.  Clinton will live out the rest of her days knowing a level of failure that few others could even conceive.  Pride preceedeth a fall.  I feel better now.

Like Loading...
By chuckscommonsense in Uncategorized on December 20, 2016.
← How far we’ve fallen…and how quickly Only you can stop Teutonophobia →