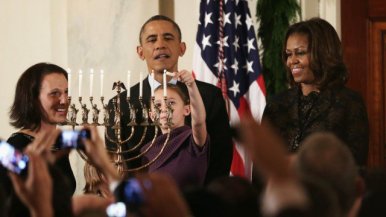 While President Obama today ceremonially marked the start of Hanukkah, offering well wishes to those who celebrate in the U.S. and worldwide.  At the same time, the President’s UN Ambassador was stabbing Israel in the back.  Judas Iscariot was unavailable for comment, but the US Treasury was seen pocketing thirty pieces of silver.

The UN Security Council today adopted a resolution condemning Israeli settlements in occupied territories. Susan Powers, the President appointed lickspittle, abstained from voting; The UN Security Council cleared the resolution on a 14-0 vote.  The measure condemns Israeli settlements as having `no legal validity.’  I’ll let you figure out what’s likely to happen from this point on.

It is Obama’s parting shot at the only Democracy in the Middle East.  He has been, at best, indifferent to Israel.  As worst, downright hostile. Today’s Hanukkah greeting will not soon be forgotten.

The best thing about a Donald Trump Presidency is that it will (most likely) eviscerate most traces of the flawed Presidency of Barack Obama.  It will reduce his legacy to little more than an historic footnote.  Obama’s prized programs, policies and regulations will become much like the man himself—empty and meaningless.