Home » Uncategorized » When I was a child, I spake as a child

When I was a child, I spake as a child 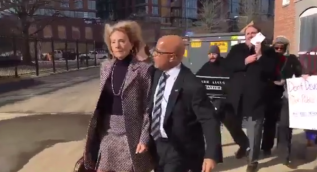 So, this is “The Resistance,” eh. I expected something a little more…noble, I suppose—given the great and essential resistance groups throughout history. The only thing these people are resisting is civility.

So let’s recap. Some men Friday morning taught a woman a “lesson” by yelling at her and physically intimidating her. And the left is cheering.  Welcome to the 1950’s.

More specifically, a small group of protestors stood at the entrance to a school building where new Secretary of Education Betsy DeVos was trying to enter.  They did not budge from the door and continued shouting at her.  Her handlers simply turned around and escorted DeVos back to an SUV.  Not content with this show of immaturity, one of the protestors stood in front of the SUV and refused to move; holding a sign and continuing his yelling.  They were able to avoid turning him into a speed bump and left without further incident.  DeVos was able to enter the school later.  “She persisted,” to borrow a phrase.

I get tired of pointing out the obvious double standards every time something like this happens…but there is much to be said for it.  Imagine if Elizabeth Warren was stopped from entering her office by three white men from the Tea Party.  I don’t ever want to hear progressives, “the resistance,” © or whatever you’re calling yourself now talk about women’s rights. You do not care about women…unless they’re on your side. 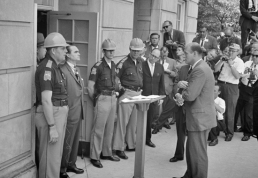 Of course this is not the first time that Democrats have prevented people who wanted to help African-Americans from entering a school building.  (pictured, right) At least George Wallace had the dignity to stand aside after saying his spiel.

If “The Resistance” applauds this kind of activity, then you ARE the monsters you are purportedly fighting. If that is truly the case, you are to be mocked and ignored.  I defend liberty. I defend the right of the protestors to protest. I defend the right of the Secretary of Education (or anyone else) to be allowed to walk through a door without having people physically block her.  That is not an unreasonable expectation.

Of course, they’re not interested in debate or an exchange of ideas. They are petty little would-be bullies who are angry that they have made themselves politically impotent. They employ the same reasoning strategies my children used to. But my kids grew out of it. I suspect those people will not.

Like little children, they don’t know exactly WHY they’re mad…they just know they’re mad.  And they’ve been conditioned to think that there is nothing more important in the universe than their feelings.  As a result, they appear to have poorly-developed coping mechanisms for reacting when things don’t go their way.

When faced with obvious failure, mature people change their tactics.  Mature people restructure their message.  Mature people reevaluate themselves.  IMmature people throw tantrums, firebomb buildings and physically intimidate 130-pound women…all while claiming the moral high ground to which they feel entitled because of their feelings.

I have to assume that the goal here is NOT to win hearts and minds in the political arena of ideas.  No, that would require something a little more mature.

Like Loading...
By chuckscommonsense in Uncategorized on February 11, 2017.
← What’s in a name? Who can a Transgirl trust? →