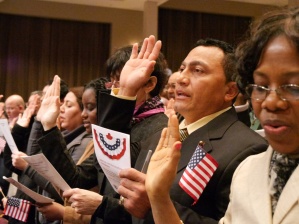 I can’t believe that we are still struggling over the definition of what constitutes an immigrant versus an illegal immigrant.  I mean, I *know* why certain people are trying to confuse the two.  I just can’t believe they’re still getting away with it.

When President Donald Trump makes his first address to a joint session of Congress this week, at least four undocumented immigrants whose temporary legal status could be revoked will be in the House watching him speak.  They’re being invited by Democratic members of Congress who are trying to get the President to change his policies on deporting illegal immigrants.

Whoops!  Did I say “Illegal Immigrants?”  That’s almost a curse word nowadays.  Several years ago, the Associated Press updated its Style Guide to dissuade reporters from using “illegal immigrant,” in favor of the blander “undocumented immigrant.”  It was a policy that I, as News Director of two radio stations, gleefully ignored.  It was for the same reason that I deep-sixed their policy of calling terrorists “insurgents” or “militants.”  It was and is the nexus of a conscious effort by the mainstream media to advance the orthodox liberal narrative.  Nothing more.

It is a cliché to ask, “What part of *illegal* do you not understand.”  But it is a cliché for a reason. There are other clichés about comparing illegal immigrants to someone who breaks into your house…clichés about people who put up large security fences but oppose a border wall…and so forth. You know what?  Those are valid comparisons.

Here is the key sentence for those of you who are demagoging this issue.  No one who matters is opposed to legal immigrants.  Did you read that? Those who have demonstrated the tenacity and patience to jump through all of the hoops to obtain citizenship are the kinds of people I am proud to call my fellow US citizens.  Indeed, they are often more patriotic than natural-born citizens.  They have a better grasp of what this country is about.  They also have usually come from nations where many of the amenities we take for granted in the US do not exist.  I want as many of these kind of people as possible to call America “home.”

I can only imagine how I would feel if I had come to America, obeyed the rules, done the right thing, waded through the interminable government bureaucracy and obtained my citizenship…then had to watch others who had flaunted the laws get all of the attention and end up with the same citizenship.  I think that would piss me off.  Especially when the illegal immigrants are often making conformity demands of the host whose house they are crashing.

To those who point out that we are a nation of immigrants—you’re right. But as a student of history, I can assure you that Italian immigrants did not demand ESL classes; Jewish immigrants didn’t protest to remove crosses everywhere you looked, and Germans who filled the heartland didn’t insist restaurants expand their menus to include sauerkraut. In short, they came here to be Americans…not hyphenated Americans.  And they (for the most part) came here legally.

If I were to move to Brazil, I would not expect the government to drop Portuguese as an official language simply because I arrived—I would not expect Turkey’s government to set up a Christian Safe Space for me if I decided to emigrate there.  Hell, when I join a civic group I am expected to abide by their bylaws, not force the group to change them to accommodate me.

And if I lived in a nation without going through their legal process for obtaining citizenship, I have NO right to complain if they ship me home. That is common sense.  Sadly, such thinking is far to UNcommon these days.

Like Loading...
By chuckscommonsense in Uncategorized on February 28, 2017.
← The Devil’s in the Definition At long last…a cure for whiteness! →