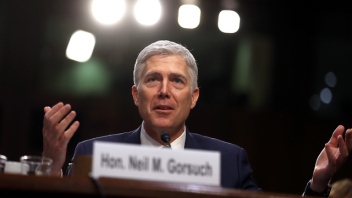 The Senate confirmed Judge Neil Gorsuch to the Supreme Court today in a mostly party-line 54-45 vote.  The closeness of the vote will be an historic footnote.  It owes more to the partisan rancor of our times than to any particular fear about Gorsuch’s credentials.  The way all this worked out, the President could have nominated Atticus Finch and he would have been opposed by Democrats.

The closeness doesn’t diminish his standing, either.  This, despite the fervent wishes of some of the less-stable members of the far left.  I’ll put it this way.  What do you call the guy who finishes last in his class in medical school?  You call him, “Doctor.”

I did not vote for Donald Trump last November.  That may come as a surprise to those who read me.  Don’t worry; I didn’t vote for Hillary either.  As a Constitutional libertarian, I felt that Trump was insufficiently solid on issues pertaining to our foundational legal principles. I know he released a list of conservative judges last year whom he was considering for the vacant Supreme Court seat, should he be elected.  It was an impressive list, no doubt.  But given Trump’s mercurial nature I gave it little thought.  He could nominate anyone he damned-well pleased.  Imagine my sigh of relief earlier this year when Trump tabbed 10th Circuit Court Judge Neil Gorsuch to replace the late Antonin Scalia.

Gorsuch’s credentials are impeccable.  He is, in the mold of Scalia, an “originalist.”  That is to say, someone that not only looks at the words that comprise our laws, but tries to interpret their original meaning.  To me, this is the only way to properly interpret law.  Hell, we should have “originalists” all over the place.  What good is a law if you can assign modern-day definitions to words that were written centuries ago?  You can theoretically make any law mean any damned thing you want it to mean.

Gorsuch’s channeled Scalia’s ghost when he said, “It is the role of judges to apply,” not alter, the laws written by Congress”  In a legal review last year, he wrote that “judges should be in the business of declaring what the law is using the traditional tools of interpretation, rather than pronouncing the law as they might wish it to be in light of their own political views.”  Slam-freaking-dunk!  This is in the spirit of Scalia, who famously said “The judge who always likes the results he reaches is a bad judge.”

Of course such interpretation is anathema to modern-day progressives who see the Constitution as a barrier rather than a solid foundation. The Supreme Court has been their vessel to implement much of the social change they so covet.  The other two branches have acted (as they should) as a check to each other on implementing significant changes.  The high court, though, requires only five votes to usher in significant swings.

When I ponder the number of 5-4 votes we’ve had in the Supreme Court on several crucial issues over the years, it makes me shudder. The fact that the Heller decision on gun rights was 5-4 mystified me to no end. We were this close to losing what I consider basic Constitutional protections.  It’s been kind of a running trope over the years to bank on the “swing votes” on the Senate—how would Roberts and Kennedy rule? The determination of basic Constitutional protections should NOT come down to one or two people—but it does. God help us, it does.

I understand Democrats being reflexively pissed about this.  This was supposed to be THEIR pick.  When Merrick Garland’s nomination was held up by the Senate last year I’m sure many figured, “Big deal.  Once Hillary’s elected we’ll get an even BETTER nominee.”  Alas, as I have been told many times over the past eight years, elections have consequences.  And it is deliciously-satisfying that because of the unmitigated arrogance of former Senator Majority Leader Harry Reid, who introduced the “Nuclear Option,” Gorsuch’s appointment was a fait accompli.

If it were most any other President, an Election Year SCOTUS nomination would not have been that big a deal.  But with someone as blatantly partisan as our former President, it WAS a big deal.  This is what happens when you lose trust. Shouldn’t have been so partisan. Should’ve kept control of the Senate.

Looking at the leadership in the Senate, I was not confident that Republicans would follow through on their promises.  I am more than relieved today.  We have a bona fide Constitutionalist on the Supreme Court of the United States.  We need more.  We need MANY more.

Like Loading...
By chuckscommonsense in Uncategorized on April 8, 2017.
← Democrats choose a poor hill upon which to die. Ten years gone →