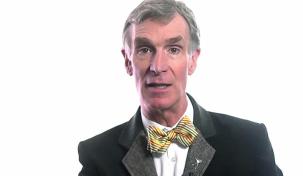 Since I am knocking on the door of age 50, I was already a young adult when “Bill Nye The Science Guy” made it’s run in the 1990’s.  As such, I lacked the kid’s nostalgia fascination when he re-emerged a few years ago into the national consciousness.  Score one for us middle-aged farts, I guess.  Since his re-birth Nye has demonstrated the same understanding of science that I possess for Haute Couture fashion.

Nye’s show was a hit because he looked the part of the nerdy scientist, wearing a bow tie before it became cool again.  He seemed to have a goofy charm that connected with children.  Insofar as it was educational and helped kids develop an appreciation for science, I’d say it was a success.

But the more recent incarnation of the lovable goofball is not so lovable.  He appears to be a dark, twisted soul…dare I say an “evil scientist?”  Nah…I wouldn’t go that far.  But his new persona is like something out of a Roger Corman movie.

The New Nye was trotted out several years ago to buttress the arguments being made by those who are calling for draconian solutions to the Climate Change issue.  Evidently, they thought a failed mechanical engineer would have the scientific gravitas to change the course of the debate and convince enough people that we should surrender economic sovereignty in order to (ostensibly) save the planet.  It didn’t work.  Rather than delivering his message as an amiable Grandfather, Nye went “Full Progressive.”  He blamed basically any significant weather event, and insignificant ones, on Climate Change.  He advocated that “Climate Deniers” face criminal prosecution.

Not content to be known as just a Climate Change Crusader, Nye expanded his targets.  He released a YouTube video which tried to make the case that laws restricting abortion show “a deep scientific lack of understanding.”  The arguments he uses to make his point sound as though they came from a ninth-grade biology student who can hope for nothing higher than a “D” on his report card.

Just a few weeks ago, Nye parlayed his celebrity status into an honorary leadership position for the “March for Science” in Washington.  Predictably it had less to do with science and more to do with asking for more government funding for pursuits—science and otherwise.  It also produced the predicted amount of smugness Progressives routinely use to tell us rubes in the hinterlands how very stupid we are—and how our lives would be MUCH better if we simply genuflected to their self-proclaimed genius.

Unfortunately, Nye was not done.  He has a new series that debuted this week on Netflix.  I am struggling to come up with the right words to properly convey it’s radioactive toxicity.  “Bill Nye Saves the World” apparently aims to use his “authority” to promote a new wave of science.  The man who thrilled kids by building soda volcanoes opened his new series with what can best be described as a Pagan Fertility Ritual.   He introduced Crazy Ex-Girlfriend actress Rachel Bloom to sing a “very special” song.   It was about the argument du jour over sexual identity.  Taste and decorum prevent me from linking a copy of the video.  I just cannot do it.  I will simply cut-and-paste the lyrics of the one of the most cringe-worthy two minutes of video I have ever seen. 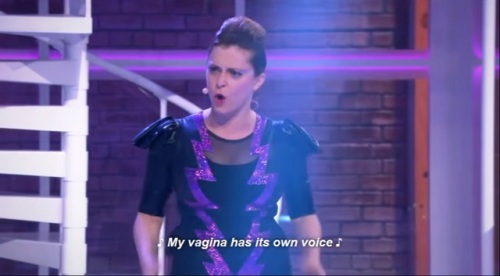 “My vagina has its own voice / Not vocal cords, a metaphorical voice / Sometimes I do a voice for my vagina . . . / ’Cause my sex junk is so oh, oh, oh / Much more than either or, or or / Power bottom or power top / Versatile love may have some butt stuff / It’s evolution, ain’t nothing new / There’s nothing taboo about a sex stew . . . If they’re alive, I’ll date ’em / Channing or Jenna Tatum / I’m down for anything / Don’t box in my box.”

I am not a prude by any stretch of the imagination.  But DAMN!

It gets no better.  In an episode titled “Earth’s People Problem,” Nye talks with Johns Hopkins University bioethicist Travis Rieder. Nye asks, “What should we be doing?”

Nye: “So, should we have policies that penalize people for having extra kids in the developed world?”

Rieder: “So, I do think that we should at least consider it.”

So the friendly Science guy is into Eugenics.  Wow.  The ease with which he discusses penalizing people with too many children is absolutely chilling.  It’s one thing to make yourself a pathetic laughingstock by using puerile methods to promote your “scientific” views on gender identity.  It is entirely another to use science as a pretext to punish those with whom you disagree.  But in this respect, Nye is simply following the lay of the land these days.  It is impossible for someone to disagree with you without being a terrible person who must be sanctioned in some way.

This is what happens when you take an entertainer and try to give him authority based upon a character they play.  Sort of the modern-day version of “I’m not a Doctor, but I play one on TV.”  If Nye used his celebrity to continue to pique our curiosity about science, that would be a wonderful thing.  But he is using his celebrity as a license to bully and spread manure.  In the process he is equating science with the silencing of dissenting viewpoints.  A real scientist would be ashamed.  Science is grounded in questioning orthodoxy.

Like Loading...
By chuckscommonsense in Uncategorized on April 27, 2017.
← More history disappears…the Age of UN-Reason continues. Jet-setters Fly to DC to March For the Climate →