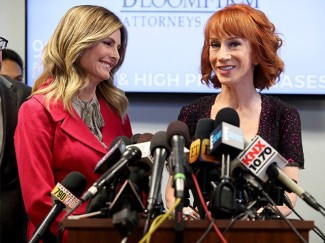 I would love nothing more than to be able to ignore people like Kathy Griffin; but when someone does the equivalent of taking a dump in the middle of my office I am obligated to at least tell them they’re wrong.

If you’ve been off the grid this week—I envy you.  It has not been a week where discourse has been heightened and barriers removed.  We haven’t had a week like that in some time.

Griffin, who falls into the category of those celebrities I *think* I might have seen here and there, released a controversial promotional video.  It featured her holding the severed head of President Donald Trump, ISIS-style.  Reaction was swift…and mostly uniform from all corners of the political spectrum.  Griffin took to Twitter a few hours later, carefully sporting a disheveled no-makeup look, and offered what appeared to be a semi-sincere apology.

Of course what she was most concerned about was her future earning potential.  And that concern came not from the political Right getting upset—but much of the Left as well.  Had the only negative feedback come from Trump supporters we would never have heard an apology.  No, the only reason Griffin was (initially) sorry was because her peers thought she went too far.  That must have been a surprise.

I feel sure that within the insular confines of Griffin’s world, the thought of beheading Trump would be seen as only *mildly* shocking—if at all.  That is the danger of never exploring life outside of your circle.  You never realize that there are perfectly good and decent people who disagree with the way you think.

Even with all that madness I was more than content to NOT have a blog post featuring Griffin’s antics.  Others had pointed out the inanity much more eloquently than I could ever hope to.  Then came her press conference today.  Holy Dogspit!

Griffin accused the first family of “personally trying to ruin [her] life forever.”  As far as I can tell, the only thing the President has done was tweet a response calling the video “sick,” and saying his 11-year old son was upset by the image.  Yes, Griffin was visited by Secret Service; but that’s to be expected after you use a large platform to speculate about killing a sitting President.

The alleged comic continued, saying “It’s a bunch of white guys trying to silence me”. “This wouldn’t be happening to a guy. This is a woman thing.”  So she is a victim of racism AND sexism.  Or more accurately, racist and sexist white guys are targeting her. Impressive.

What got me the most was Griffin’s tearful answer to a follow-up question.  It was punctuated by her saying—not once, not twice but thrice—“he broke me.”  Yup…it’s not her fault.  If the President were not so mean and nasty Griffin would not have had to have done such a mean and nasty thing.  I suppose it is the 2017 equivalent of “The Devil Made Me Do It.”  I am reminded of the standard defense offered by the man accused of sexual abuse.  “I’m sorry, your honor.  She just kept it up and I just lost my temper, I guess.”

Oh and Mrs. Griffin?  The Committee to Re-Elect President Trump thanks you for your generous contribution to his 2020 campaign.

Like Loading...
By chuckscommonsense in Uncategorized on June 2, 2017.
← For The Love of All That Is Decent—Shut Up, Hillary: “Run, Hide and Tell” is the new “We Shall Fight Them in the Streets” →