I *hate* talking about abortion.  Isn’t there a new gun control proposal I can bitch about? 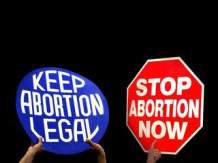 Unfortunately, the issue I want to avoid like the radioactive hobgoblin that it is simply won’t go away.  And the latest incarnation of the debate is what happens when people reject compromise on a complicated and deeply-emotional issue.

Laws introduced and passed earlier this year that allow no-excuse abortion up to the millisecond before birth (and in some cases, AFTER birth) have been countered in the past few weeks by fetal heartbeat bills with codicils that could actually punish women who seek an abortion.  While I prefer that state legislatures be the places where such issues are dealt with, and not the federal level, I am not getting a good vibe from either extreme.

Yes, there are many things I will not budge on.  Most of them are based upon what I see as immutable characteristics of individual freedom that are outlined in the US Constitution.  The abortion debate doesn’t fall so neatly into that category.  What freedom-lover can claim they are opposed to “choice” under most any other circumstance?  How can someone claiming sanity be against “life?”

Both sides had lived for a generation under an uneasy truce that resulted, more or less, in third-trimester abortions being illegal except under mitigating circumstances.  But in today’s highly-polarized climate, uneasy truces are no longer allowed.

I’ve said it before, and I’ll say it again.  My personal goal is to make abortions “safe, legal, and damned-near unheard of.”   How we achieve that will NOT be through legislation.  It will be through repairing our collective soul. And our individual souls.

Like Loading...
By chuckscommonsense in Uncategorized on May 14, 2019.
← Mueller Time leaves us with a giant hangover Bill Buckner: Undeserved scorn and redemption. →