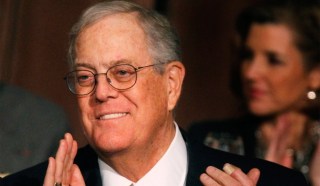 I realize it’s a classic case of “not all leftists” who have behaved poorly in the wake of David Koch’s death. But there have been enough to give me pause.

The Koch brothers being cast as evil incarnate was mostly created through the efforts of former Senate Majority Leader Harry Reid…and amplified by many willing accomplices.  While cowardly using the immunity offered by speaking on the Senate Floor, the odious Reid blasted the Koch brothers, accusing them of trying to “buy the country”.   He called the Kochs “un-American” for their right-wing activities. From there, it was easy to cast them in the role of villain.  Remember, this was years before the American left had Donald Trump upon whom to train their sights.

It was textbook Saul Alinsky. Identify a target, and throw everything you’ve got against it.  And it stuck.  Before Trump burst on to the national political scene, the Koch Brothers held the mantle of “rich guys the left loves to hate.”

It’s not surprising for nameless, faceless posters surfing the fiery edges of 4-Chan and Reddit to say despicable things about someone who’s died.  That’s what they do.  But the number of verified leftists who gleefully cheered about David Koch’s demise, hoping that he suffered exquisitely before he passed, was enough to turn my stomach.

The mainstream media even got a few sidelong blows in.  In announcing Koch’s death on Friday, the New York Times described him as a funder of the “right-wing libertarian movement.”   That is, to put it charitably, a very clumsy description.  The L.A. Weekly called him an “infamous right-wing billionaire”.  OK.

Here’s the thing.  The Kochs were not even Conservative—at least not by the contemporary definition. David Koch was a supporter of gay rights, abortion rights, drug legalization, and much else that does not fall under the current “right wing” agenda. As a Libertarian Presidential candidate, Koch advocated for the abolition of Social Security, the FBI, the CIA, and public schools.  Later, he said government should consider defense spending cuts and tax increases to balance the budget.  That’s edging in to liberal/progressive ideals.  Koch industries has also been a conspicuous supporter of Justice Reform, specifically efforts to reduce sentences and lower incarceration rates.   Over the past couple of years, Koch Industries has been involved in the immigration debate, supporting immigration reform—-including legal paths to citizenship for DACA recipients and reforms to the existing visa lottery program.  This is at odds with President Trump.  That is usually a recipe to earn you LOTS of brownie points from the Left.

They were conspicuous philanthropists.  The Koch Foundations have kicked in an estimated $1.5 billion or so to an array of causes and institutions most liberals love.  Those include public television, medical research, higher education, environmental stewardship, criminal justice reform and the arts. The theater in which the New York City Ballet performs facility had become run down.  The Kochs put up $100 million for renovations and ongoing maintenance.  A more detailed list of their philanthropy would take all day to compile.

But that’s not good enough. The far left demands total ideological purity. And if you work against their holiest of holies, Climate Change and Universal Health Care, then you are eligible for the full range of their fury.  In these two areas David Koch was unambiguously libertarian.  And that was MORE than enough for hard-left Progressives to actively celebrate his death…and in some cases, wish the brothers a speedy reunion.

The demonization of the Koch Brothers is the perfect modern-day example of political and social scapegoating.  The facts of the life and times of David Koch suggest a complicated history of wealth, altruism and activism—a story that does not so nearly fit into the binary “Right vs. Left” paradigm.  But no…people were told to hate them.  So they hated them.  Even beyond the grave.

Seeing how the progressive wing of the Democratic Party has behaved in the aftermath of David Koch’s death further convinces me they should be in charge of nothing more substantial than a lemonade stand.

Like Loading...
By chuckscommonsense in Uncategorized on August 26, 2019.
← Throwing Granny under the bus to “own the Jews.” Kavanaugh? Again? Really? →