Once upon a time if you purposefully intensified an autistic child’s fears, then paraded them around in front of cameras to do exactly what you told them do, you would be accused of child abuse.  I guess that only applies now if we’re talking stage mothers at child beauty pageants in the south. 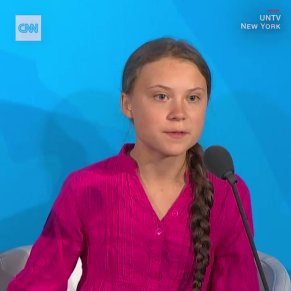 Greta Thunberg, a 16-year old Swedish girl who has Asperger’s Syndrome appeared before the United Nations Monday.  She has become the face of the far-left extreme of the Climate Change movement.  She is convinced that the world is beyond saving and there’s no point in her attending school as the world will be uninhabitable by the time she’d be an adult.  Her speech yesterday to the governing body included about two-dozen “How Dare Yous!!”

These are the kids that Progressives have created. This is exactly what they want. Kids who are scared to death and thinking we’re all going to die soon…screaming at the adults to SAVE THEM!  This is the modern-day equivalent of “The boogeyman’s going to get you!”  Of course, parents who used that old trick to scare their children into compliance did not subsequently use the kid to go from coast-to-coast to scare OTHER kids.

It would be noteworthy if this were a new tactic, but it is not.  And it is not necessarily limited to those on the political left—although they seem to have perfected it.  Boomers grew up scared to death of imminent Nuclear attacks.  My generation had a dose of that, along with a lot of environmentalist-fueled anxiety about the coming Ice Age and uncontrollable population growth.  Those younger than we were hit at tender ages with fears about Acid Rain and holes in the Ozone Layer.  Those implanted fears and anxieties now mostly center around the Climate Change debate.

Pumping out worst-case scenarios and placing government as the only possible savior has been a tactic of Statists for centuries.  And there is no more reliable recipient and eager amplifier of these Doomsday messages than young children who have not yet developed the capacity to think, reason and judge.

I forced myself to watch Greta’s speech to the United Nations yesterday.  I have no evidence either way but I could not convince myself that these were entirely her words.  At times, it looked like a hostage video.  Yes, I think her fear is real.  That has been forcefully incorporated into every fiber of her being.  But I do NOT believe the words were hers.

“We are in the beginning of a mass extinction and all you can talk about is money and fairy tales of eternal economic growth. How dare you.”

You can’t have it both ways.  You can’t use a child as a political prop, push her out on an international stage to give emotional testimony on why billions of people would have to make sacrifices—then act with righteous indignation when criticism comes. If people really cared that “she’s just a kid”, then she wouldn’t be on this world tour to begin with.  People saying “it’s abusive to use this child as a prop for a political agenda” are not cyber bullying.  Simple.

And to Greta, I would say this.  People who insist on eating beef and enjoying the comfort of air conditioning have not “taken away your childhood.”  That would be your parents—and the other enablers who have filled you with irrational fear, then pushed you out into the forefront of a global debate to be used simultaneously as an unassailable shield and a cudgel.   They thrust you into the front lines while cowardly standing behind you and decrying every defense of your opponents as an attack against a girl.  In short, you are being used like a Shake N Bake bag by very bad people, and it is heartbreaking to witness.

This is made doubly heartbreaking by the fact that I have a high-functioning 13-year old autistic son.   If I were to take Charlie out on a world tour to promote libertarian ideas and ideals you would (correctly) claim I was guilty of child abuse.  But I won’t do that.  I respect Charlie too much.  And I respect the debate process too much.  And I’m not a dick.

My experience with Charlie and some of his autistic peers has also taught me that they can be the perfect vehicles for unscrupulous people to use them to broadcast emotional appeals to the masses.  Autistic children are VERY narrow-minded and literal.  Once they are convinced of certain facts there is NOTHING that will change their minds.  One of the traits of autism is GREAT difficulty in processing new information that doesn’t agree with previously-established facts. The process produces anxiety and anti-social behavior, along with emotional shutdowns.  I couldn’t stop thinking of this while I watched this poor girl regurgitate the fears that have been drilled into her.

Yes, there are many out there attacking Thunberg personally, and that is wrong.  Period. But the vast majority of people being called out for “attacking a scared 16-year old girl” are saying nothing about her and focusing on her coerced message—along with those who are clearly pulling her emotional strings.  It is plenty bad enough that these people are arguing for large-scale economic and social overhauls in order to fight this imaginary dragon they have created.  But to use a 16-year old girl that you have been frightening into compliance as an unassailable avatar of your angst makes you a terrible person.
And I will not give an inch to people like you.

Like Loading...
By chuckscommonsense in Uncategorized on September 24, 2019.
← “Climate Strike” strikes all the wrong notes Affirmatively Disappointed →