Home » Uncategorized » We were “corona-duped”

As horrible as the riots and looting has been over the past few weeks they have served a purpose—and more than just the obvious.

For one it has likely ended the gun control debate for the short term.  It is exceedingly difficult to fault someone for thinking they need a little firepower after witnessing the way police disappeared when confronted with a REAL threat. 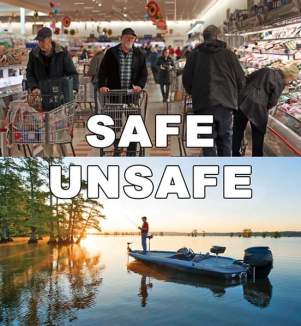 But more importantly, it has exposed some uncomfortable truths about those who have been the most vocal about taking strict social control measures to thwart the spread of COVID-19.  Their relative silence this past week shows that most of their concern had little to do with health.  It had more to do with controlling the behavior of others.

From the get-go I have said that the numbers on this did NOT suggest a draconian solution.  No I am not a doctor or an epidemiologist…but I CAN think, reason and judge.  It appeared that this was going to have a mortality rate in the 1-2% range…at worst.  But fear is a powerful emotion.  And people had a generous amount of fear drilled into them for several weeks—enough to where they were willing to do just about ANYTHING to slay this dragon that had been created.

Now, the very same people who called lockdown protestors “granny killers” (or worse) have been bending over backwards this week to support the protests.  Supporting the protests is not the issue.  The issue is supporting them so soon after you excoriated people for doing the EXACT same thing in terms of social distancing.

If your argument is that the protestors have weighed the risks and decided that it is worth it in order to protest, that’s fine…but you are missing the point. Many of us thought it was worth the risk to attend a loved one’s funeral, or to go to work, attend a church service, get our hair cut, or to do a thousand other innocuous things. But we weren’t allowed to — because of the same people who are now ignoring whatever health risks the protests have created.  They are letting protesters do what they denied to us for three months—the ability to do or NOT do something, based on the risks as you weigh them.

There are a lot of risks people would have been willing to take over the past three months to do certain things, but we were told we could not because it would have put others at risk.  Are those protestors not putting others at risk?  No they’re not.  But then again, our going to the hair salon or to church would not have put anyone at risk three weeks ago.  You were lying about the problem—you needlessly exaggerated it in order to make yourself feel essential and important.  You overplayed the risks so you could look like a great savior.

And what about those of you who have been good little soldiers?  Who have done exactly what government asked of you for the past three months—no matter how much it hurt.  No matter how much it impacted your bank account?  Don’t you feel even a LITTLE pissed now that Government leaders are suddenly saying that standing shoulder-to-shoulder, sweating and breathing on each other is no big deal?   Do you feel as though you’ve been played for a fool?

People made major sacrifices to fight the spread of Coronavirus. Now, the same people who demanded those sacrifices tell us they are suddenly NOT a priority.  If this sounds like a sickening double-standard, that’s because it is.  The ONLY thing that has changed in the past few weeks is that THIS round of protests you agree with…the other you did not.  Really…that’s all there is to it.

In short, we’ve been deceived.  We destroyed the economy and millions of peoples’ lives and livelihoods for nothing.  People who get a REAL charge out of being able to dictate the behaviors of others have used this as a pretense to feel relevant and powerful.  These are bad people.  Unfortunately, I fear too many people will bend over and meekly accept whatever these people say the next time they use fear to fill in the blanks of the unknown.

Like Loading...
By chuckscommonsense in Uncategorized on June 6, 2020.
← Another well-educated dumbass Black Lives Matter: The Concept vs. The Movement →